The practice of gerrymandering has become a growing issue in our electoral politics. The concept itself has existed for centuries, but given the United States’ winner-take-all system and the polarization in Congress, gerrymandering has had a profound, yet understated effect on the political landscape of our country. It has drastically reduced the fairness of congressional elections, and has been a major contributor to the hyper-partisan climate that has swamped Washington. One way our country can take a step towards undoing many of the entanglements that partisan gerrymandering has created would be to ensure that all states have an independent commission in place to draw congressional districts.

Gerrymandering is a method of redistricting that intends to create an advantage for one political party by manipulating district boundaries in order to create a discrepancy between the amount of seats the party holds in comparison to the amount of registered party voters in that district. It has a negative connotation, and is associated with corruption of the democratic process. Gerrymandering is most commonly applied in two different methods, “packing” and “cracking”. 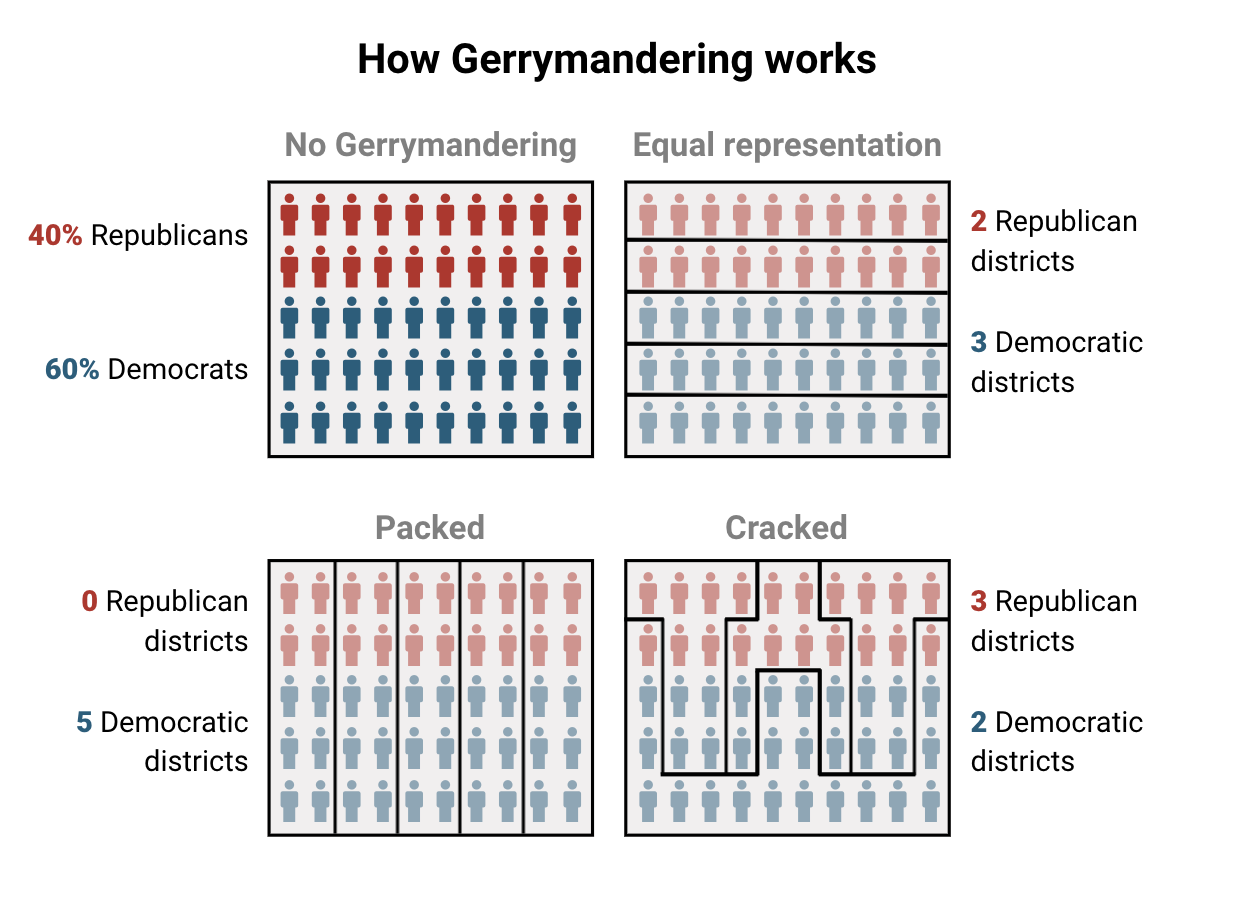 “Packing” is a strategy of placing a bloc of voters in a small area in order to reduce the competitiveness of elections throughout multiple districts. This causes the bloc to be overrepresented in a concentrated district. That group will be represented by someone that mirrors their views, but they only have that representative to speak for them, which marginalizes their overall influence on the state’s political makeup. As the above graphic demonstrates, this can also be done by distributing groups of voters across districts in a way that makes them a slight minority in all of those districts, preventing them from being fairly represented. Packing is commonly deployed to dilute the influence of a minority party, but is also used to target certain demographics. One example of this is Florida’s 20th congressional district. Located in the northern Miami area, it is a minority-majority district with a high number of Black voters and is represented by a Black congressman. But by looking at maps of the underlying predominant racial and ethnic groups, it is clear that the district represents most of the Black voters in North Miami (Payne-Riley 2017). Instances of packing have also been heard before the Supreme Court, such as the 1993 Shaw v. Reno case which challenged unusually-shaped districts in North Carolina that were no wider than the interstate highway in some spots and heavily comprised of African-Americans (Oyez 1992). 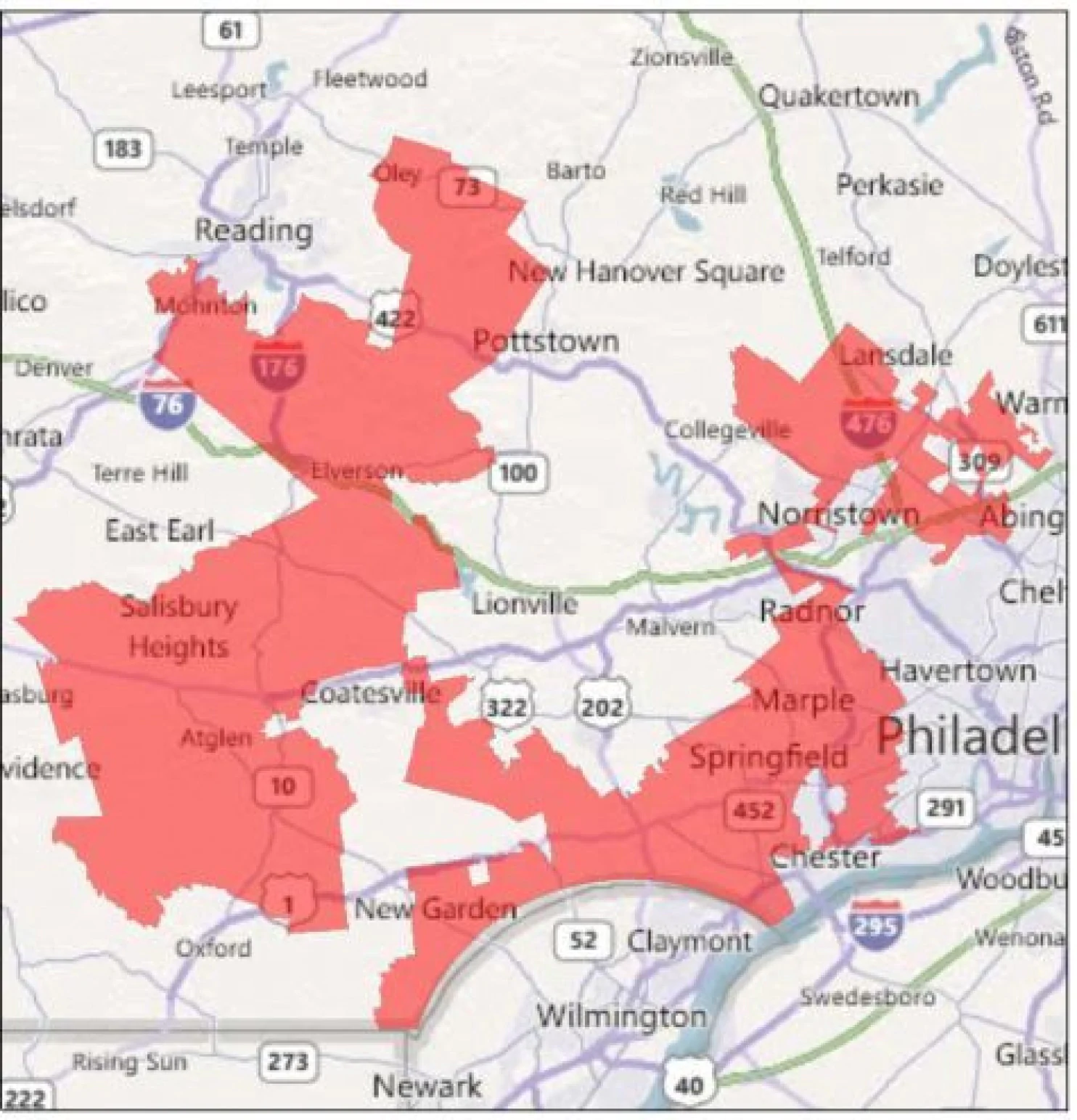 “Cracking” is a strategy of dividing a bloc of voters into separate districts in order to dilute their votes and prevent them from comprising a majority in a set of districts.  It serves as an opposing alternative to packing, as it spreads out a demographic rather than condensing them while concurrently reducing that demographic’s influence. It is commonly used by a party that faces an ideological deficit in an area, yet controls the state legislature, to create more seats for themselves by splitting the majority party into many different districts, as the graphic shows.

It is also effective in dividing “communities of interest” (Blake 2011), which form around issues of social, cultural racial, ethnic and economic interests. Cracking splits up these potential communities and removes their ability to elect advocates that champion relevant issues and concerns to those communities (Payne-Riley). “Cracked” districts are often defined by their bizarre shapes and size, as these creatively-drawn maps allow the party in charge to achieve these imbalanced layouts. An example of such a layout is the Philadelphia metro area. Montgomery County, located just outside of the city, is large enough to make up its own congressional district yet is split up amongst five other districts (Payne-Riley). The area’s 7th district, pictured above, stretches from the city into Amish country and has been ridiculed for resembling a “cartoon moose” and is frequently mentioned as one of the most gerrymandered districts in the country (Bui and Cohn 2018).

Why is Gerrymandering Important?

As the usage of unfair redistricting practices has continued to rise, so have the levels of public scrutiny and pressure regarding the issue. Polling conducted by the Brennan Center for Justice from 2017 and 2019 showed over 70 percent of voters from all parties agree that the Supreme Court should place limits on gerrymandering, and the 2019 poll also revealed that over 55 percent of all voters who have a partisan affiliation have unfavorable views of the practice (Brennan Center for Justice 2019). Politicians from both sides of the aisle have echoed these concerns as well. Presidents from Ronald Reagan to Barack Obama have vocally condemned the practice, and legislation has been introduced regarding gerrymandering in the House of Representatives, but to no avail. Rep. Alan Lowenthal (D-CA)’s “Let the People Draw the Lines Act” introduced in 2013 advocated for nationwide independent commissions and was an important step in the right direction, but ultimately was not signed into law. In the absence of national legislation, though, states have taken matters into their own hands. A growing number have taken it upon themselves to create independent commissions, and they have implemented a variety of committee structures in order to ensure fairness for their districts. Voters and lawmakers alike agree that gerrymandering must be addressed. Unfair redistricting undermines the goal of a representative democracy.

What can be done about Gerrymandering?

The most prominent solution to the problem of gerrymandering has been implementing these independent commissions at the state-wide level through state legislatures or a referendum. Ten states have passed laws that task an independent commission with redistricting, including swing states like Michigan and Colorado. These commissions have varying numbers of members and processes of appointing members of the commission, but all of them limit the involvement of elected officials and have been upheld by the Supreme Court in accordance with the 2015 Arizona State Legislature v. Arizona Independent Redistricting Commission case (Ballotpedia). However, not everyone has agreed with the Court’s ruling. Organizations such as the National Conference of State Legislatures have argued that independent commissions violate the Constitution and unfairly exclude state legislators from the process. They additionally filed an amicus brief in the Arizona State Legislature case claiming that independent commissions give legislators “no substantive involvement” in the redistricting process and that commissions violate the Elections Clause (Ballotpedia). Other detractors have stated that commissions reduce the transparency of the process in that they are led by unknown bureaucrats rather than elected officials that can be held accountable. None of these critiques, though, address how those same elected officials they want to see included have been the ones responsible for the gerrymandering problem or how involving legislators in the process makes elections any more democratic.

What should be done about Gerrymandering?

My recommendation is a federal statute that would require each of the 40 states that do not currently have one to implement an independent redistricting committee, similar to Rep. Lowenthal’s previously proposed bill. The commissions would be composed of an even number of members from the two largest political parties in the state, who would be selected by the Majority and Minority Leaders of the state legislature, as well as members that do not belong to a political party. Commission members would not be picked from the legislatures and would be barred from participating in any political activity, such as attending rallies or making campaign donations. All maps created by the commission would need to be approved by a supermajority of its members, and would then be reviewed by the state supreme court to ensure they are geographically contiguous and compact, and as equally populated as possible (Lowenthal 2013).

Instituting nationwide independent commissions is a feasible solution that takes the important job of redistricting out of the hands of legislators with ulterior motives and instead makes it the responsibility of a bi-partisan committee. It directly addresses an issue that is universally agreed upon as being problematic for our democracy and brings an added level of fairness into our congressional elections. This issue has become even more important with the Supreme Court recently declining to take a stance on gerrymandering in the Gill v. Whitford case, making a national solution even more urgent. Independent commissions can help work towards fulfilling the Founders’ vision of equal representation and a fair democracy, and truly “letting the people draw the lines.”

BillTrack50. “Redistricting in Ohio & Other Places before the Midterms.” October 10, 2018. www.billtrack50.com/blog/social-issues/redistricting-in-ohio-other-places-before-the-midterms/. (web content)